Uli Berberich Martini, whose Martini Callaway team won the 2007 FIA GT3 European Teams title in 2007, is back for 2008, with two Corvette Z06 GT3 cars – and a new team-mate, Sascha Bert. During the Monza test days, they set the second-fastest time, just one thousandth of a second behind the Prospeed Competition Porsche. 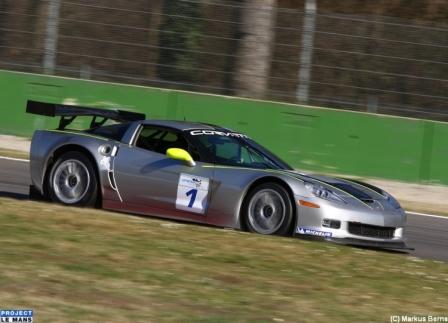 “Sascha is a both a good friend and a very fast driver,” Uli commented. “He is also a good teacher, and I have gained one second already here today in the first sessions, so he has done his job well. He is a nice guy, and we do this for fun, not for anything else, and we’ll have a lot of fun together for sure.As for the car, everything is perfect. This is the last car to get the sequential gear-box, which is quite helpful. It fits perfectly with the engine, and I think we are quite competitive this year. Last year it was hard work, hand shifting, and now you can concentrate a bit more on other things and that helps.”

Sascha, who raced the Zakspeed Saleen in the 2006 FIA GT Championship, was happy to be back in the paddock. “I am very pleased to be here and to drive with Uli,” he said. “My job is to find the right set-up and to teach Uli, to help him to get some good results. Nobody before has really worked with him in this way, and he was under a lot of pressure. He is very good when you show him what to do. The car is really fast, as we have seen today, and I think we can go in the top five with Uli. But he is doing this for fun, this is his hobby, and so he has to smile during the weekends. But as for me – I’ll really try to get pole position … “